I'm requesting help in identifying a mark found on a 1750 Brazilian gold coin. The mark appears to be the letters IG, with a crown above and a cross or fleur-de-lis below. It is punched atop a bold plug at the center of the coin and is double-punched. The coin was likely plugged and marked in New England sometime from the 1770s to the 1790s, based on the weight (215.44 grains) and the economic standards that were prevalent in the area. The mark is stylistically similar to Boston silversmiths John Coney and Joseph Goldthwait, though Coney was working much too early. Any help as to where I should look next will be greatly appreciated!! 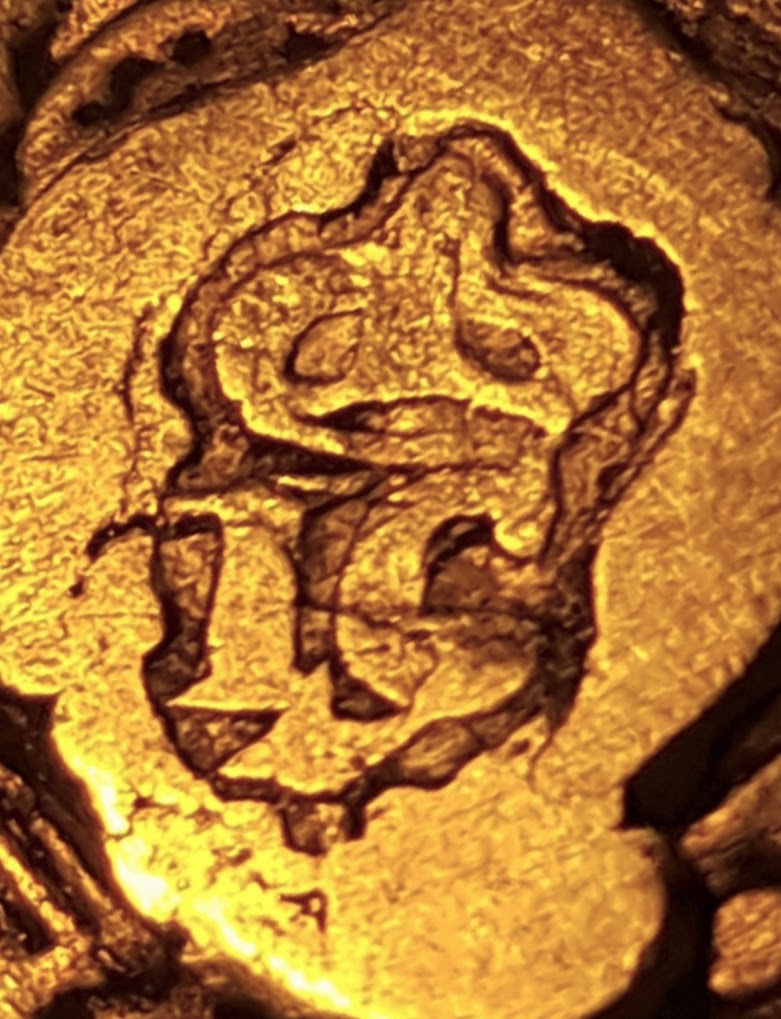 I've been searching for "Counterstamped Coins" and also many of the Colonial American "IC" silversmiths (do you think it is "IC" or "IG" maybe?) :::
This is a difficult process, at first I thought it might be a Philippine Counterstamp or a French Counterstamp, but now I just don't know ::::

I'm not even quite sure how to know this counterstamp is American Colonial, I do see the resemblance to the American Colonial silversmith you mention, stylistically at least there is a resemblance with the "Crown/Initials/Star" combination ::::: This is a difficult task, I am out of my league here :
Top

Here is a brass coin weight from France :: I have had these coin weights in the past, and I even owned coin weights which were counterstamped, so I know a little about this subject, but not enough to identify your coin's counterstamp ::::: Anyway, back to the coin weight from France, what I am wondering is if the counterstamp on your coin is similar enough to this brass coin weight such that the stamp means the coin has bee "proven" to be a genuine coin with the absolutely correct weight ::::::: Many gold coins were shaved on their sides, and if you weren't really careful, you might accept a gold coin with shaved sides and thus you had accepted a slightly-lesser gold content ::

See the "Crown/IS" image on the brass coin weight? The counterstamp on your coin might be a variant of this brass-coin-weight-image, and in a time when most people could not read, maybe the image on this coin meant that your coin had been "proved" by a French merchant and this was the easiest way to prove that your coin was genuine way back in the 18th century. By stamping an image of a brass coin weight directly upon the coin, everyone would instantly know that the coin was genuine using symbols and not words (symbols being much more effective than words).
Top

If the coin does have a plug, then I suppose it is a "regulated gold coin" and not a "counterstamped coin" but how to identify the person who stamped the coin I do not know ::

"Regulated Gold Coins - Article I, Section 8, Clause 5 of the Constitution gives Congress the power to “coin money, regulate the value thereof, and of foreign coin, and fix the standard of weights and measures.” This power was necessary in post-Revolutionary times because gold coins from many countries of the world circulated as legal tender in the United States. They were valued for their gold content not as specie. This cacophony of coins of the world would be an obvious source of confusion in domestic and foreign commerce. Coins from Brazil, Portugal, Spain, France, and England all circulated concurrently. However, each had a different weight and fineness making trade extremely inconvenient.

The problem was first dealt with in colonial times, when coins were “regulated.” This practice continued after Independence. A goldsmith or silversmith would drill a coin and add gold in the form of a plug to increase its weight. If it was then overweight, he would clip and/or file its edge. Thus, coins were “regulated” to certain standards. The plugs that were added were then stamped with a hallmark indentifying the regulator who guaranteed the gold content of the piece. Regulators, who were also jewelers and highly thought of members of the community, included John Bayley, John Burger, John David Jr., Lewis Feuter, Myer Myers, Thomas Pons, Thomas Underhill, and William Hollingshead. However, none was so prominent and famous in numismatic circles as Ephraim Brasher."
Top

"For the advanced reader we have compiled and present here an updated list of known silversmith marks on regulated gold coins of North America and the West Indies, with the locations and dates attributed to each artisan. In terms of $15 doubloons, only two metalsmiths are known to have crafted their own pieces in the U.S.: Ephraim Brasher of New York (EB, 1786-87) and Standish Barry of Baltimore (SB, ca. 1790). Furthermore, only four metalsmiths so far are known to have regulated Spanish doubloons: Ephraim Brasher (EB, ca. 1784), John Burger of New York (script-JB, 1784-1805), Joseph Richardson of Philadelphia (IR, ca. 1776) and Joseph Edwards, Jr. of Boston (I•E, prior to 1783). Only the last-mentioned is known to have regulated a cob doubloon (lot #83 in our Auction #23, May 2018).
Gold regulator9 marks known to the author so far on regulated (mostly plugged10) gold coins11 compiled from recent sales and references, in alphabetical order by mark:
Crowned A•R = Arnaud and Ruffy, Martinique, ca. 1798
D.V = Daniel Van Voorhis, New York, 1782-87
EB = Ephraim Brasher, New York, ca. 1784
F&G = Lewis Feuter and partner, New York (British occupation), prior to 1784 Script-GC with cayman = George Clinton, Jamaica, ca. 1770-80
GL = Gabriel Lewin (or Lewyn), Baltimore, ca. 1771
IB = John Bayly (or Bayley), Philadelphia, ca. 1793
IC = Joseph Carpenter (Norwich, 1747-1804) or John Coburn (Boston, 1725-1803)
ID (or JD) = John David, Jr, Philadelphia, 1765-94
I•E = Joseph Edwards, Jr., Boston, prior to May 1783
I•LT = John Letelier (or Le Tellier), Philadelphia, ca. 1770-90
IR = Joseph Richardson, Jr., Philadelphia, ca. 1776
IS = Joseph Smith (unconfirmed), Boston, prior to 178912
Script-monogram-JB = John Burger (or Burgher), New York, 1784-1805
Script-J•B = James Barret, Norwich, ca. 1800
Script-JC = Joseph Callender (or Callendar), Boston, 1771-1821
LF = Lewis Feuter, New York (British occupation), prior to 1784
MM = Myer Myers, New York, ca. 1784
OH = Oliver Hastings (Hatfield [Massachusetts], date unknown) or Otis Howe (Boston, 1788-1825) (PS = Philip Syng, Philadelphia, prior to 1789, unknown so far on coins but stated in records)
RH = Richard Humphreys (or Humphries), Philadelphia, ca. 1777
9 Many of these marks were attributed by Gordon to various West Indies islands, but by his own admission, it was an “intriguing minor mystery” that so many Brazilian “Joes” (actually half Joes) ended up in the islands when there was virtually no trade between them and Brazil. The North American colonies and early U.S., on the other hand, relied heavily on the West Indies trade, and Brazilian gold coins likely reached the British colonies through Portuguese trade. In the years since Gordon’s book, it has come to light that North American metalsmiths played a far bigger role in these gold coins than previously thought. Also note that this list does not include any marks specifically attributed to the place itself, like ED for Essequibo & Demerara or S for St. Vincent, for example.
10 Note that by “plugged” we mean coins with interior plugs (usually large), as opposed to edge plugs that could have been simple fillings for mounting holes. Also, it is not unusual to see West Indies coins with multiple central plugs, one inside another, or even gaping central holes where plugs were removed. Coins with unmarked plugs, as well as some coins with silversmith marks but no plugs, are omitted here for lack of proper available analysis.
11 In addition to the doubloons and half Joes, the types of gold coins known with regulation marks include French Louis d’ors, English guineas and other Portuguese (Brazilian) coins, as well as Spanish colonial “pistoles” (cob 2 escudos) and even “double pistoles” (cob 4 escudos).
12 For whatever reason, several IS coins are known with further plugging and stamping for the island of St. Vincent (1798).

"Joseph Goldthwaite [1706-1780] was a Bostonian by birth. In 1731 his advertisement mentions that he was a goldsmith and was 'removing from Mr. Burrell's shop to a house adjoining at the sign of the red lion.' Joseph was a member of the Ancient and Honorable Artillery Company in 1732, and later captain and adjutant of Silvery and Pepperrell's regiment at the siege of Louisburg in 1745. Joseph retired to his mansion house and ten acres near Weston in 1773. The family was loyalist and scattered by the events of the Revolutionary War. When his estate was settled in 1780, his inventory included 'a silver hilted sword' which may have been his personal sidearm."

It might not be an exact match, but considering that there are very few examples of silver known by this silversmith, could it be close enough?
The crowns look different, and I still see "IC" instead of "IG," but I couldn't find any other "IC" mark.
There are other Colonial American Silversmiths from the New England Area with the initials "IC" and "IG" but their maker's marks are unrecorded.
Top

Thank you all for your replies. I am familiar with regulated gold coinage and the present coin has certainly been adjusted to conform to a weight standard. The circumference has been clipped and re-edged, and a very large plug has been inserted in the center of the coin. The mark on the coin absolutely served to verify that the coin contained the correct amount of gold. Goldthwait has been my most probable candidate, but I would love to have more certainty.
Top

Given the high social standing of this silversmith, and the fact that he is listed as a goldsmith, it would make sense that he would have been in charge of regulating gold coins, but I just wonder why his name has never been mentioned before, perhaps a historian could link his name to the regulation of gold coins, I assume that another example of a regulated gold coin bearing this hallmark has not yet been recorded :::::

I was wondering why the crown is clipped on the silver hallmark, yet the crown is very prominent on the gold coin ::
Top

The mark on my coin is roughly 6 mm tall, punched on a coin 30 mm in diameter. See image below. 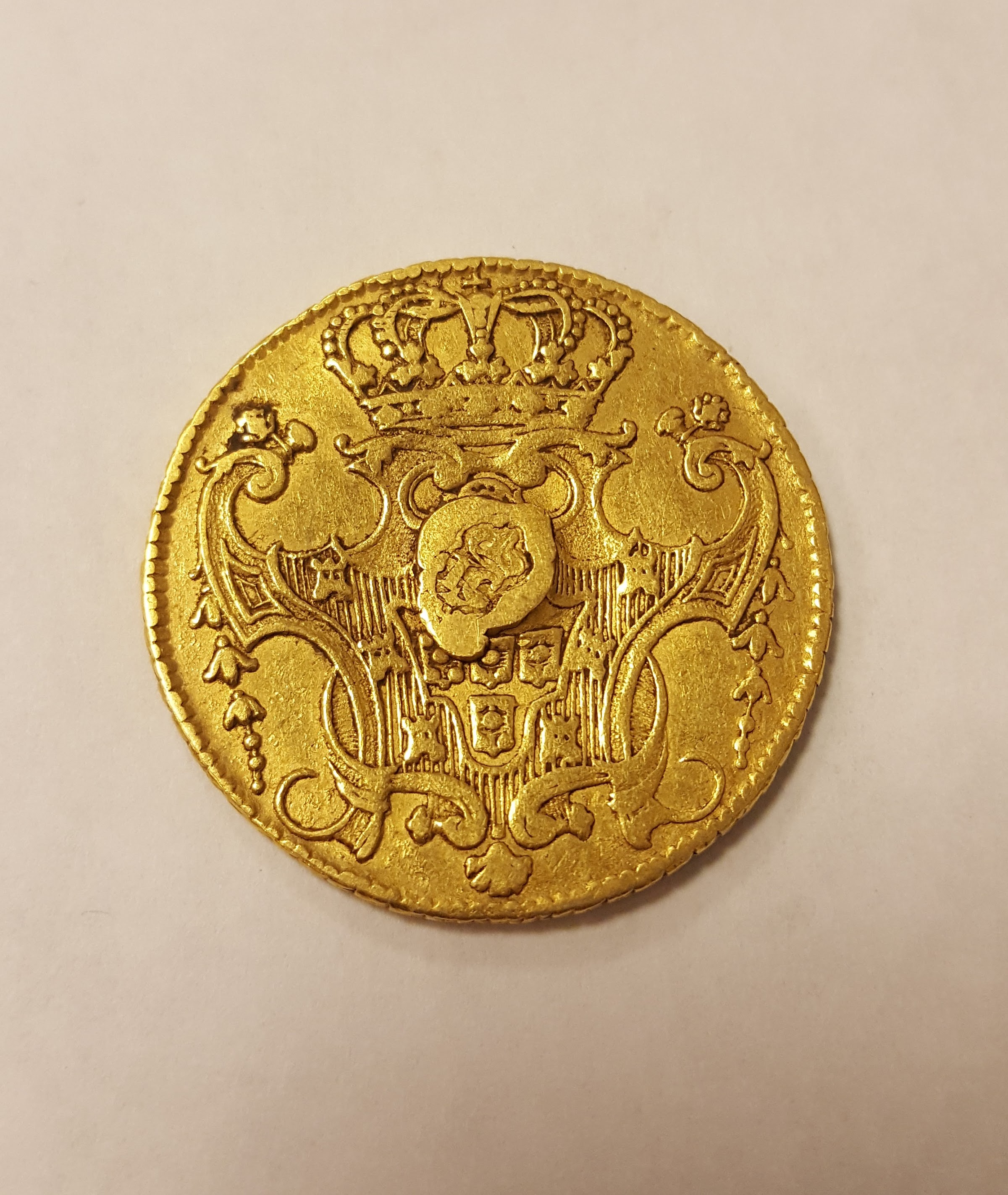 A regulation by Goldthwait makes sense contextually, though I have been unable to find anything that connects him to coins in particular. His recognized mark is unknown on a coin, and the current mark is unknown outside of the present example. Just about a dozen objects survive from Goldthwait, and they all feature the same mark. A poor image of this complete mark is given below. There are certainly similarities between the Goldthwait mark and my mark, though I am not sure I am confident enough to make an attribution. 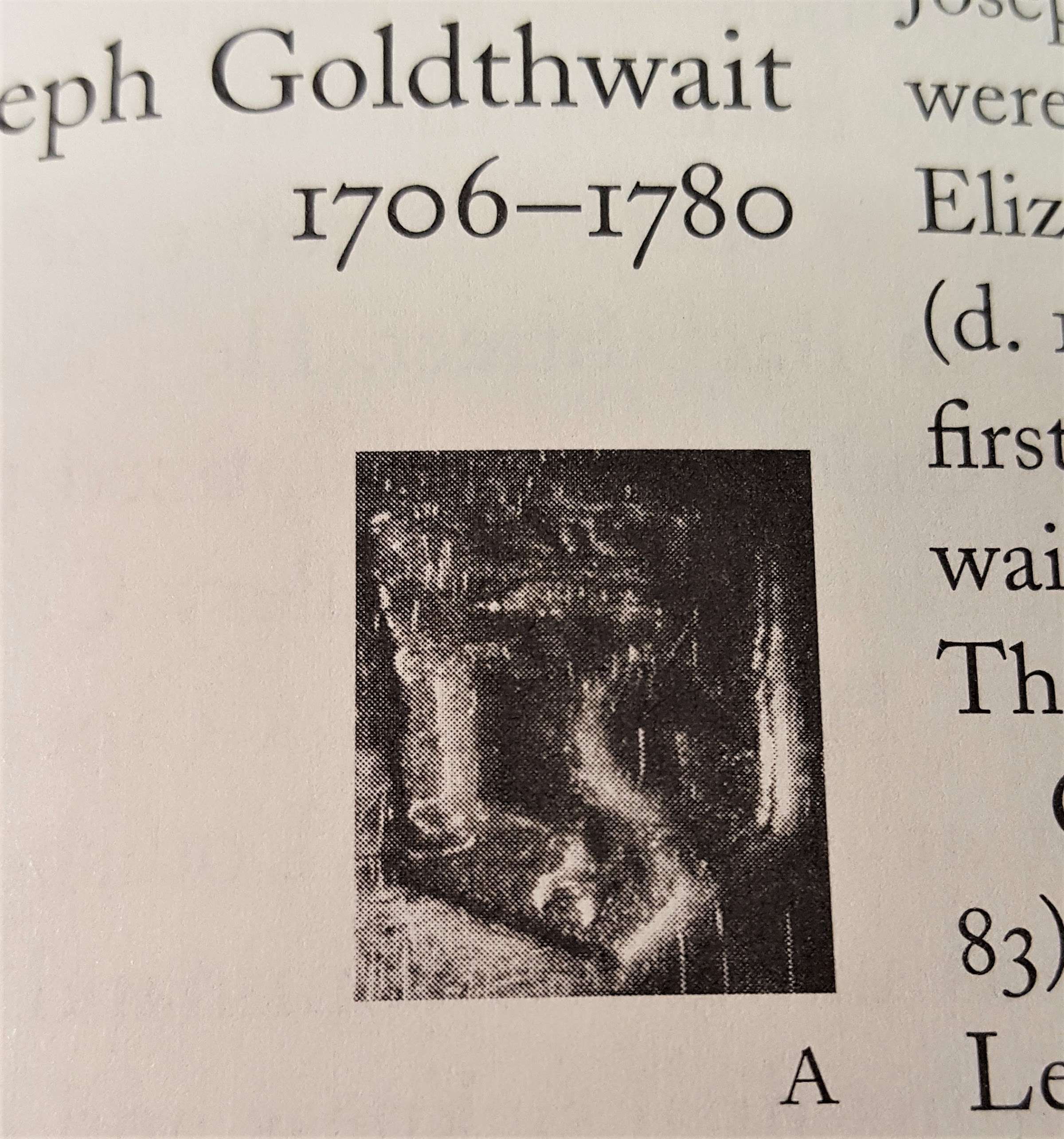 That is a very tiny hallmark, 6mm tall and 3mm wide, this hallmark must have been specifically created for the regulation of gold coins :: Even if we were to find each and every known example by Joseph Goldthwaite, I think there will always be some dissonance between the gold hallmark and the silver hallmarks ::: It is a judgement call to say whether to say "Attributed To Joseph Goldthwaite" or "Possibly Joseph Goldthwaite?" with the latter implying more uncertainty than the former ::::

Perhaps contacting a historian might uncover a link between gold coin regulation and Joseph Goldthwaite? I was thinking that perhaps his name has been omitted from history due to his royalist sympathies? Perhaps only the American Patriots who supported the new American Constitution were the gold coin regulators that were recorded and passed down through history? (History is written by the winners?) :: That's pure conjecture at this point though :
Top
Post Reply
12 posts • Page 1 of 1