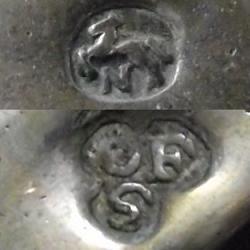 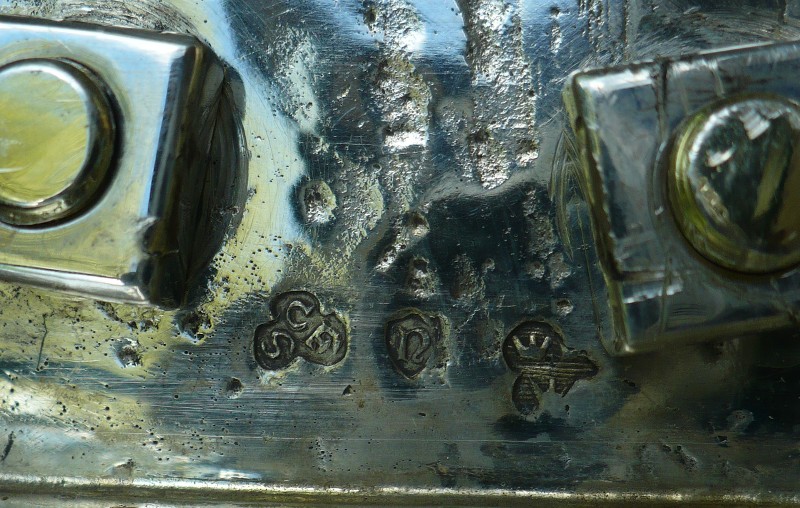 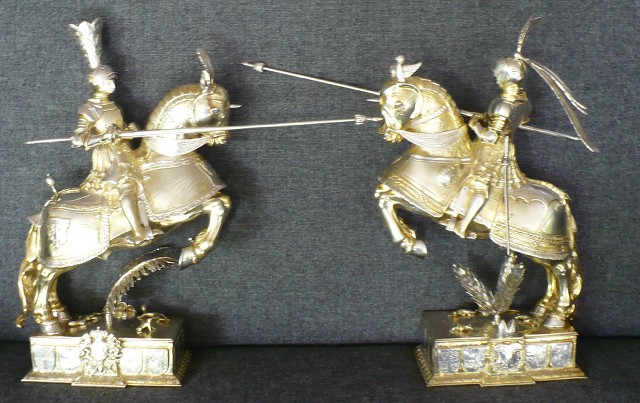 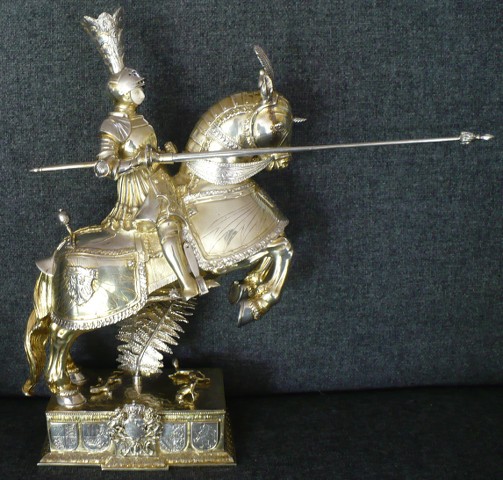 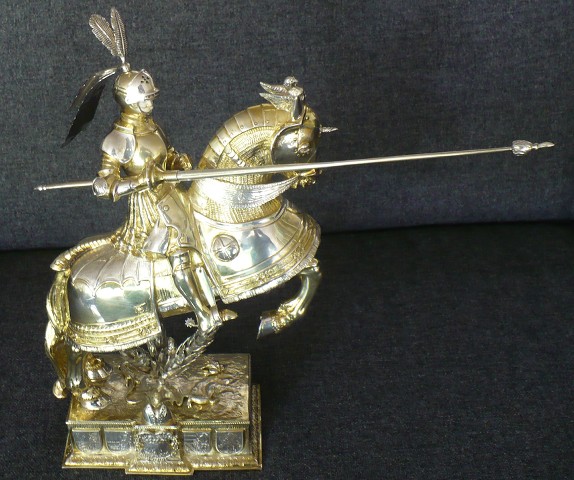 Could this be clear evidence Neresheimer obtained old maker's marks of deceased masters? Are these early pseudo marks used 1893-1900?

Hi Peter, I don't think that such conclusions can be drawn from the marks we are seeing here. We have no way of telling whether the punches used here were newly cut or were the old ones. Thiele writes somewhere that punches freely changed hands between various Hanau companies to be used by other Hanau makers. I believe one of the reasons for that was to make it even more difficult to trace back one specific piece of Hanau silver to its maker or to date it. Regards, Bahner
Top

Hi Bahner, thanks for the reply. If I understand you correct Hanau silversmith tried to avoid specific marks which could identify maker and production year. However to my knowledge this specific N and shield shape has been attributed only to Neresheimer and seen as Neresheimer maker's mark. Or was this specific N also used by other Hanau companies?

Many examples prove that.Undoubtedly the same form and the same mold for casting but completely different Hanau marks.
Sometimes the maker can be traced but in most cases correct,serious and evidence based description would be:
``Hanau,late 19th or early 20th century``
Top

In this particular case, CSF mark:
The punch tool was probably collecting dust somewhere,then surfaced and freely used.
After all, I always wondered what happened to punches;thousands of them.Deceased or bankrupt silversmiths,assay offices collapsed during wars and revolutions.Let`s not be naive;most of those punches were never legally and officially destroyed.
Regards
Top

The Ludwig Neresheimer & Co company was founded in 1890, taken over by the Bauer family at the beginning of the last century and is still in their possession today.Since 1890, all articles have been handcrafted, which ensures a high quality standard. The long-term stability of value will always be given for handcrafted exhibits.

Each product is stamped with our house stamp, a Gothicized N, the silver purity, and the symbol for German craftsmanship.

it is to many time away, so I can not remember which objet it was. Possibly this was also an objekt of Neresheimer with a pseudo-Hallmark of Stuttgart.
Top

Sorry, I should have been more precise. I was referring to the old maker's marks, not the Neresheimer-N. This was no doubt used by Neresheimer only. Just checked with an old catalogue of Nereheimer's (well, not really old, it is from 1985...): the statues are listed under No. 11805 (left) and 11806 a (right) and were reproduced from originals in the Hofkirche in Innsbruck, Austria. I suspect that the originals are actually bronze reliefs or rather details thereof from the tomb of Maximilian I. in that church. Another interesting piece of info from that catalogue: on the last pages are more details on some the originals, the original makers or cities of origin. Among others it mentiones a candle holder from Stuttgart, mark "CSF" (!), undoubtedly referring to the CFS Sick mark we see here. Regards, Bahner
Top

Hold the horses, you really made my day by mentioning Maximilian I. Today I found the long awaiting answers on Who are they? And yes made by Neresheimer;
King Arthur at Maximilian’s cenotaph in Hofkirche Innsbruck Austria 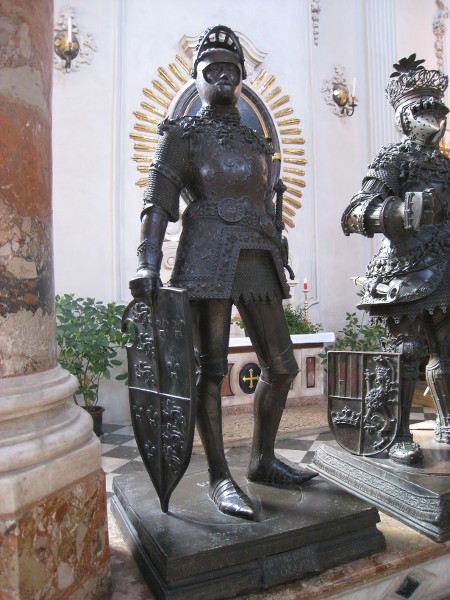 Tomb of Maximilian I: King Arthur
c. 1513
Bronze, height 215 cm
Hofkirche, Innsbruck
In spite of the many concessions to the new spirit which was spreading across Europe at that time, Germany in the 16th century did not break with the medieval tradition. The native tendencies, given free play in the late Gothic style, were an excess of naturalism, sculptural dynamism and the thirst for expression, which were in complete contrast to the idealism, the sense of balance and the taste for harmony extolled by the neo-Platonists of the Renaissance. In many aspects Germany therefore remained faithful to the aesthetics and philosophy of the Middle Ages.
Significant in this respect was the attitude of the first Habsburgs to whom the Empire owed the revival of the old Germanic dream of universal monarchy. Maximilian, who was too impecunious to establish in stone the evidence of his glory, left to the engravers the task of celebrating his glorious deeds and illustrating his allegorical writing, completely imbued with past chivalry; his love of heroic chronicles permeates, too, the proud statues of the legendary kings of Theodoric the Goth and Arthur of Britain, figures cast in bronze by Vischer the Elder in the Venetian manner, during the Emperor's lifetime, to mount guard with his ancestors around his tomb at Innsbruck.
Although other artists acted as the principal bronze casters of life-sized ancestor figures for the unfinished, massive tomb ensemble of Emperor Maximilian I (d. 1519), Peter Vischer and his workshop produced two of the most striking figures, King Arthur and King Theodoric.
https://www.wga.hu/html_m/v/vischer/peter_e/arthur.html
King Arthur
Meet King Arthur (import London mark for 1925) 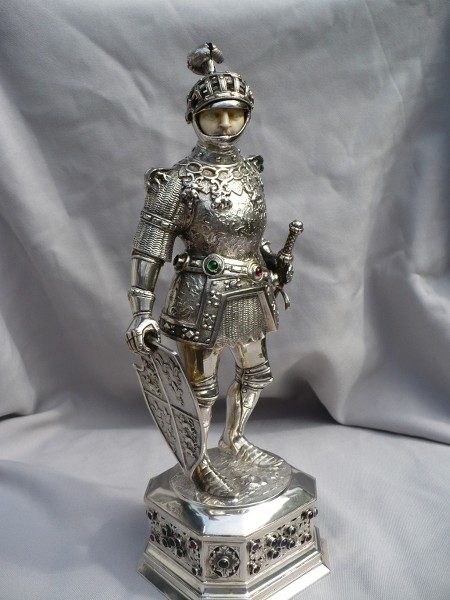 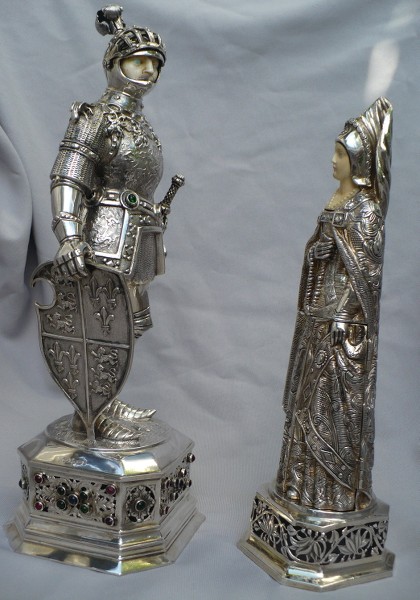 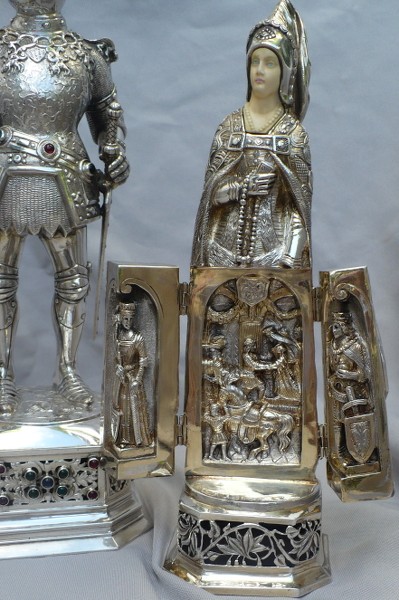 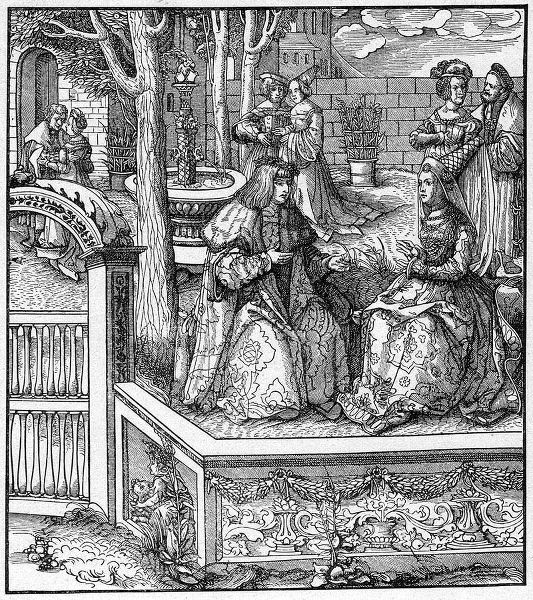 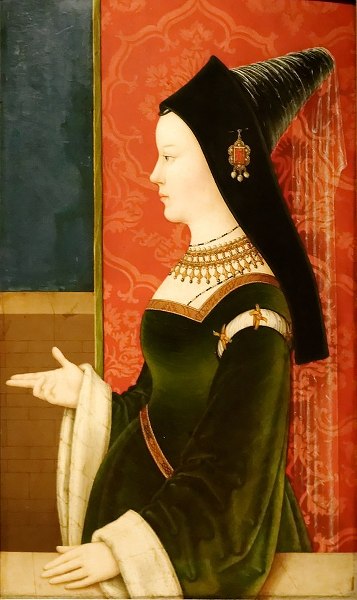 It appears to me Neresheimer made a series of silver statues (smaller copies) of statues surrounding the cenotaph (empty tomb) of Maximilian I in Innsbruck.