hi I have come across this cut glass / silver (plate?) claret, marked on the side is 92 Berlin, mark looks like crestent and crown and J H Werner, the only thing I found he had 2 shops one for making the order of crown & Red Eagle Order on Linden,( 1914 - 1918) and another shop on Friedichsrt, do you think this is silverplated or silver? should I clean it or leave it alone? If anyone has any more information it would be greatly appreciated! Thanks in advance

Hello, J. H. Werner was one of the many Berlin jewellers to the German imperial court. It was founded in 1870 and existed as an independent company until the end of 1929. Werner’s main shop was on Friedrichstrasse 173. A branch was openend after 1907 in the newly built Adlon Hotel near the Brandenburg gate. I am not sure what mark I am seeing here. Is it really halfmoon and crown ? If so, there should also be a three-digit number (800, 835 or 925) for the silver fineness. If that is missing, then it is most likely plate. Werner mostly worked as a retailer and most of the stuff with his mark or name on it was made by some larger company. Best wishes, Bahner
Top

Many years later and a follow up. As noted in the original post, this was a found item in the United States, not an international purchase. So what? Well...Kaiser Wilhelm wanted Berlin to be a major center for world travel. But accomodations were tight in the city. So, land was cleared for building the new Hotel Adlon (1907), followed the next year by the emperor's own favorite, The Hotel Esplanade. Several others opened too. This cured the lodging problem for tourists, with Americans coming to make up some 11 percent of the total. What grade do Americans buy? Sterling of course. And that's why that "92" on this item was probably a bad strike of "925". I have no doubt of the crescent and crown in the photo.
Top

With all that said, wherever this item has gone, it should be considered for it's historical importance. During World War II bombs rained down and destroyed the entire area around the Potsdamer Platz. The ruins of two buildings, including The Esplanade, were all that remained. It became a black market zone, and later a no-man's land locked behind a horrible wall. Save some of the structural remnants conserved from The Esplanade, nothing there survived to tell of a long gone era of opulence. If research should confidently reveal that this item may have passed through the retailer's shop in The Adlon and into the hands of a visiting American sometime in that era, then it could well deserve a spot in a museum that tells the story of Berlin before the shattering. The Potsdammer Platz itself has been completely rebuilt anew. But it sits on top of old stories of a time of kings of countries and commerce. [See Trev's historical entry on Wilhelm's work designing silver to be coupled to the pottery work of his K.P.M. Berlin porcelain manufactory. Probably should have avoided that whole war thing altogether.]
Top

Indeed. What the others posted is accurate. Some iteration J.H. Werner persisted after it was acquired in 1929. I have a WW2, Iron Cross, Second Class, produced by the firm.
Top 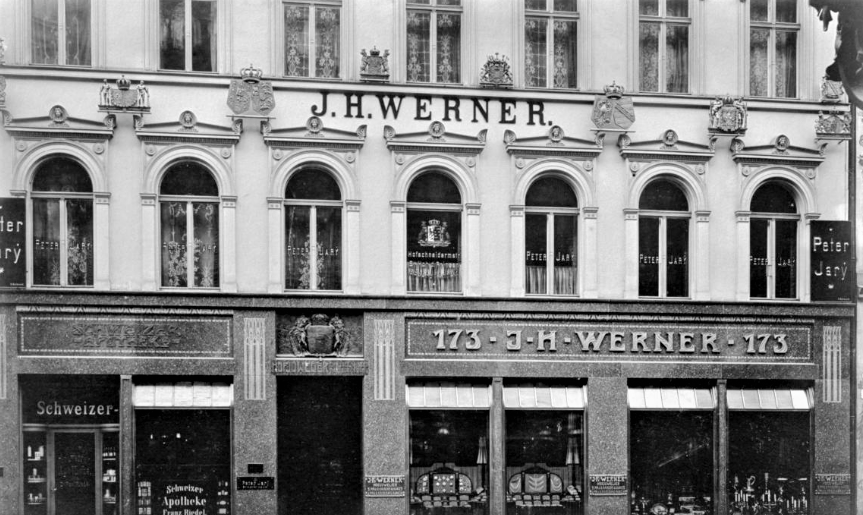 Hello,
I came across this thread looking for information on the same stamp. My aunt has three pieces of a silver set with the same markings. We were wondering what significance they have. Very interesting read above. Thank you. I am not sure how to add images here. Can someone help me with that if you would like to see the images.
Admin edit.
Last edited by oel on Sun Apr 19, 2020 1:05 am, edited 1 time in total.
Reason: Forum rules
Top

For information how to attach and embedded images see:
viewtopic.php?f=5&t=42199
Please read the forum rules: no questions about value or what is it worth.

Thank you for the help on posting images. Sorry about asking the wrong questions. :)