I recently found my first gold ring whilst metal detecting on a beach in Sussex, South East England. I’ve reported it to the local police as “found property” so hopefully, it will be reunited with its owner although, despite its good condition, it could have been on the beach for years. In the meantime, I have been trying to identify the hallmarks.
It's just my luck that they are unusual and I've tried extensively to identify both the maker and the Assay Office but, without success. All I know is that it's not a UK hallmark.
The ring is an 18 carat plain "D" profile wedding band measuring 5.5mm diameter x 18.5mm ID and weighing 4.6 grams.
The maker/sponsor is E.T. followed by a plain cross that looks like a large + sign. I don't think it came from outer space though:) The year letter is a serif capital “L”.
Not finding the makers mark wouldn't be too bad but the Assay office mark is not very clear. I have tried many different ways to improve the clarity of the photo but this is the best it gets. The shape is similar to a bloated, reversed Y", but it’s not symmetrical. The closest mark I've seen is a French cockerel but I'm not convinced. Without the Assay Office, I can’t tell the date.
I would be very grateful if anyone could help me pin it down.
Thanks,
Richard

Just to assure you that we are not ignoring you, It's just that you appear to have us stumped.... at the moment.

One clue to the country of origin is one that uses spelling of 'carat', rather than 'karat'. 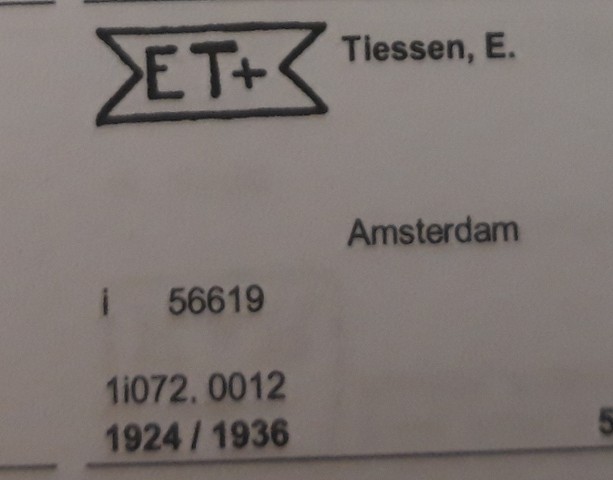 (The info does NOT contradict oel`s data on Amsterdam importer - must be the same jewelry manufacturer,i.e.importer).
Top

Thanks for all your replies. I have been dropping in every few days to see if there has been any information but didn't yesterday.
I took the daisy-chained image below using an endoscope and it shows the hallmark more clearly. The characters are only 0.8mm high so it difficult to get a good picture. This may be of use to others in the future.

I agree that the ring is of South African origin. I had already seen photos and posts suggesting that it might be (or a Dutch import) but the makers marks were "ET+" whereas the marks on the ring are "E.T.+". This morning I googled "E. Tiesson" and after scanning through quite a few hallmark images, I found the one below, where the markers mark was shown exactly as on my ring. Without knowing the item is from South Africa, it is impossible to recognise the Assay mark as a Springbok in a "U", but I now realise that's what it is. With that knowledge, the date letter is for 1959. Although it looks like a capital gothic "L", it is actually lowercase.
Thanks again for your input.
Richard

To me it appears your images are not showing?

Sorry the images didn't display. I've been struggling to use ggl images. I'm trying a different image server so hopefully, they will now be visible. 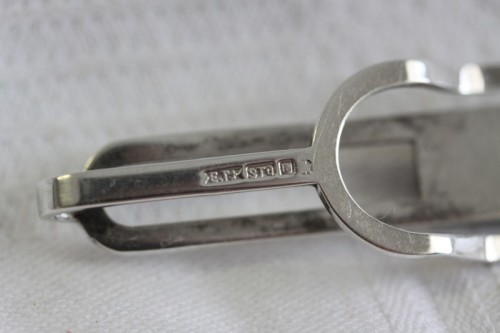