Yates of Birmingham -John, Thomas, Others

Yates of Birmingham -John, Thomas, Others

Hello, at the last auction I viewed I snapped a few photos of the manufacturers mark on somes dessert spoons. I thought they carried some interesting electroplate marks. 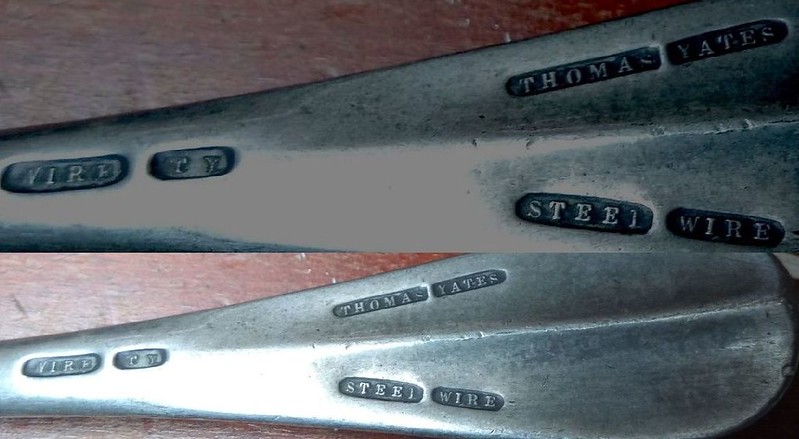 "Yates" is a well known name in the Birmingham, England, cutlery trade, and particularly notable were, John Yates and John Yates & Sons. Even in our own Forum we have nearly double figure threads featuring John Yates of Birmingham. A good guess would be that "Thomas Yates" on the spoons could be one of the "& Sons". A likely guess but "Yates" is a common surname (about 2% of population in 1881) in the area of England's West Midlands where Birmingham lies. An 1818, city trade directory, had 11 Yates enterprises listed. John Yates & Sons (and apparently there were 4 sons) had a business using 4 properties at Coleshill Street, Birmingham( No 38 is specifically mentioned). Electro plate work, spoon making, Pewtering , brass founding, beer pulls and bar fitting were the occupations involved.
So what about Thomas Yates and the spoon marks. Thomas Yates was known as a "pewterer" and the spoons illustrated are basically pewter spoons but strengthened with a piece of steel wire down their centres, obviously making them more servicable. His address is indicated below in a couple of design registrations. It was 37 Coleshill Street Birmingham and we have dates 1861 and 1870. The registrations are held by the National Archives at Kew.

Eileen Woodward in her brilliant Canadian PDF on basemetals describes Thomas as a spoon-mould maker, but I assume if you were putting pewter around a steel wire you would need a mould for that. The following image is from Wrightsons Birmingham Trade List 1818. That list shows Thomas and another Yates of possible interest .

Another reference says Thomas Yates was a specialist spoon maker, there having been no other types of wares recorded with his mark. If you look on line however there are several pewter whistles attributed to him, some carrying his name. Needs some research maybe as the Wrightsons 1818 trade list says different. At Coleshill Street he is a mould maker for, type, spoon, core and glasshouses.
But who is John Yates, tutania spoon maker at Lional Street? Is this an unrelated Yates? Is it the John Yates we think we know?
The wonderful "Graces Guide" has lots of adverts for "John Yates" of Birmingham companies. Below I have some collage images taken from ads which give some information. 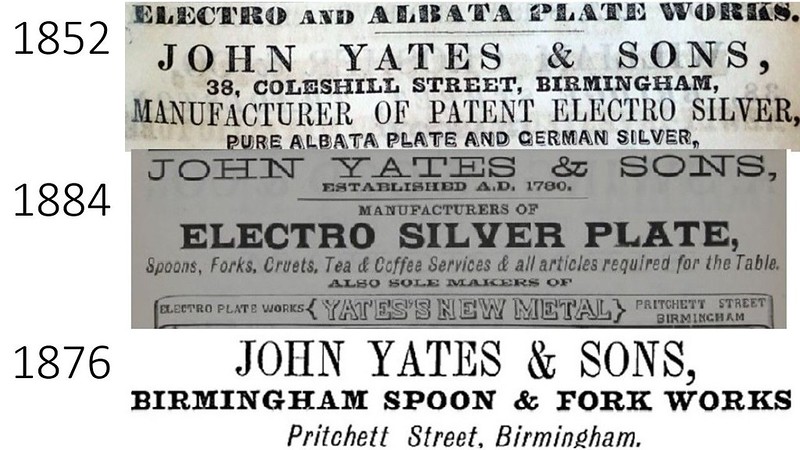 The John Yates company was established in 1780 and from an advertising sign we know it became "Co" or "Co Ltd" in 1804. John Yates and Sons were also established in 1780 so highly likely it was the development of the same firm. We see in the ads, works addresses other than Coleshill Street, but some used concurrently. In 1839 we have 38 Coleshill Street but also a Protshill Street Works and at this site they have an edge tool business. I had previously only thought of John Yates in association with cutlery. I did find an extra note about some of these work places, "they operated Pritchett Street Works, and by 1863 had added Exchange Works on Rocky Lane in Aston, later Aston Manor, Birmingham".

It appears John Yates had his "fingers in several pies" at the same time. One was a pewtering "pie". In the 1820's-1830's at 40 Coleshill street there was the pewter, beer and liquor machine makers, and iron merchants partnership of Yates, Birch and Spooner that started in 1829. One of John's sons, "James" entered that business in 1837 but John split from James in 1839. "Lucas Spooner" passed away and a partnership of Yates and Birch was formed. The Pewter partnership was not just pewter as shown below. This trade list entry claims them to be German Silver Makers and Dealers in Blanks and using 39 and 40 Coleshill Street.

By 1860 it was just the "James Yates" Company. James Yates was associated with pewter working and "Mandal Silverware", what ever that may have been. More on Birmingham pewter makers can be found at:

A second son, Edwin, is also mentioned as working with his father but no Thomas.
Here is an extract from a local Birmingham newspaper in 1866.

"It was a momentous event, the arrival of the Chinese Commissioner, Pin-Ta-Jeu, in Birmingham on June 8, 1866.............. he alighted at Snow Hill Station and was entertained by the mayor, Edwin Yates ........... the mayor took his guests the short distance to his own establishment, that of John Yates’ Edge Tool Manufacturers of Rocky Lane in Aston."

This newspaper article did also mention a Thomas Yates
"John Yates Edge Tool Manufacturers of Rocky Lane in Aston......... "traced its origins to Thomas Yates, who was a die sinker in Coleshill Street in 1788. His son, John, extended the business to four properties, where he carried on electroplating, spoon making, pewtering, brassfounding, and the manufacturing of beer pulls and bar fittings. He also opened up his edge tool works."

I know this fragment of information is from a local newspaper, but it was much nearer the time correct time period than our internet age. At around the start of the 19th century could a "die sinker" be " a mould maker for, type, spoon, core and glasshouses"? Is the Thomas Yates who made the spoons I photoed be the father of "John Yates" and not a John Yates son? A radical idea, so please do correct me. I could be correcting myself though. If Thomas Yates had an established firm in the 1780's, how likely is it that he was registering designs in 1860 and 1870? Could the design registerer be a brother of John Yates? Plenty of speculation here, so are there any more concrete views please?
What about John Yates, tutania spoon maker at Lional Street in 1818 now? Tutania is a silver-white alloy of tin with other metals (as antimony and copper) that is used for tableware. I believe it may be a stating works for "our" John Yates before Coleshill Street as there are no other John Yates references for 1818. In 1835 "Yates John &c" is referenced as "britannia, tutannia, and pewter spooner, Coleshill street" and some of the "Yates" ads have items made in tutania or similarly spelt materials.
Please offer your facts and opinions.

Post script.
It seems John Yates &Co as edge tool makers were in business until the mid 20th century. Known for brick trowels. By 1953 John Yates & Co. was included in the Eva Industries Group of Companies owned by Eva Brothers Ltd., of Crabtree Forge, Clayton, Manchester. The group was renamed Eva Industries in 1960, and in 1982 they were acquired by Anglo-Indonesian Corporation plc. Currently, the John Yates & Co. name is held by the Ralph Martindale Group of Companies, who still manufacture agricultural hand tools as Ralph Martindale & Co. and Chillington Tool Co. The date that John Yates & Co. tools stopped being manufactured is unknown.