Apologies if this is in the wrong category, I haven't been able to identify these marks on this ladle. Any information you could provide would be greatly appreciated. 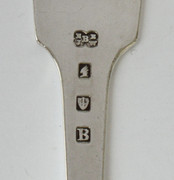 They are plater's marks used by Edward, Edward Jr, William and John Barnard of London. Barnard's plating side of their business was thought to be operating sometime during the 1850's/1860's period. The plating works were set up by Michael Farraday. The Barnards and the Farradays were connected by marriage on several occasions, John Barnard (I) married his sister-in-law, Margaret Farraday, the sister of Michael Farraday on the 14th March 1826. Michael Farraday was married to Sarah Barnard on the 12th June 1821.

Thank you Trev, apologies for the wrong category and thank you again for the added information.