Almost caught between the Watson & Gilliot and the Harrison marks, but not quite either. (??) We can be sure it's England, but what's up with the Coptic under the anchor? And while there seems to be an item or catalog number, might the "88" be some form of date (1888?)? All I'm certain of is that it is not McHale's Navy! 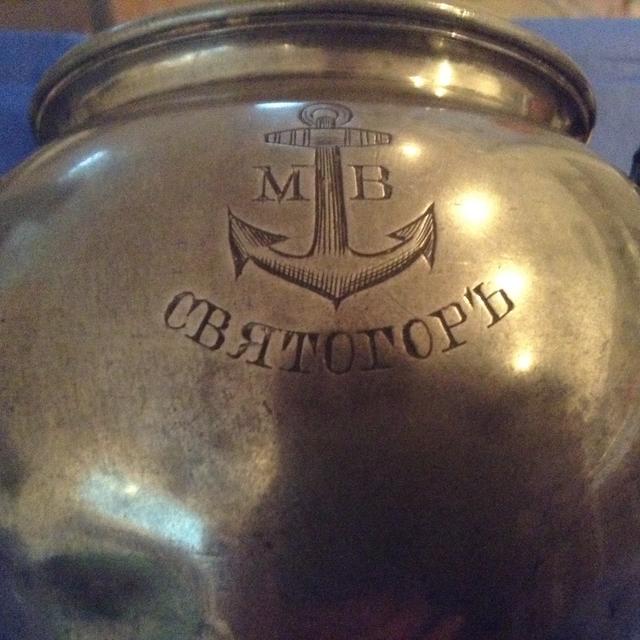 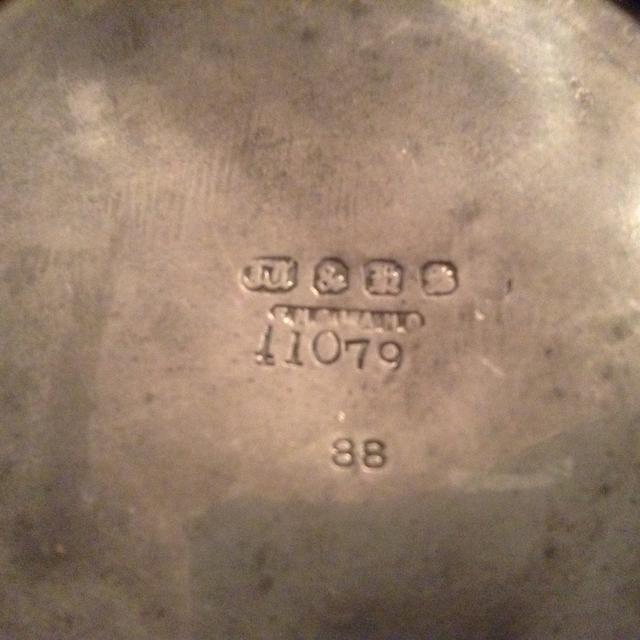 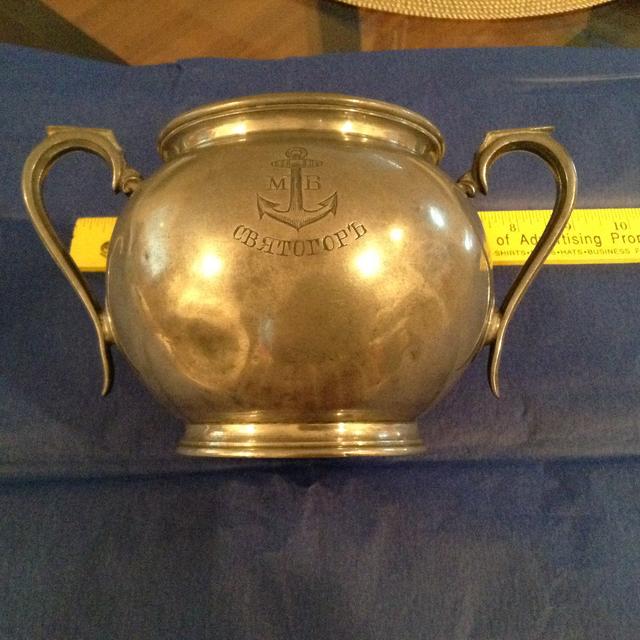 The text in Cyrillic says "Svyatogor" which is some kind of a mythical hero and because it has an anchor it could have something to do with this ship originally named Svyatogor and built in England: https://en.wikipedia.org/wiki/Krassin_(1916_icebreaker)
Top

Maker is Walker & Hall of Sheffield.

The item surfaced in the same place as an old U.S. Navy (Anchor too) handled sugar, so there seems to be some credible logic in the suggestion of the icebreaker (the Royal Navy putting the giant in his coffin, only to assume his powers with a refloating). Seems there are two most-possibles here: an item to go to the Russian Imperial Navy (property of the Tsar) and aquired back with the Allied Intervention, or a piece commisioned for use on the captured ship (property of the King) before it was returned to the Red Star government (property of Lenin & Company).
Top

Well into this Pro-viet accounting of the naval antics of that Scarlett Harlot, the Red Redemption, is the counter claim of the boat's scuttling by her own crew [suggested in another source as a blocking action against the Royal Navy] in the Dvina River on 01 August 1918: http://www.soviet-empire.com/ussr/viewt ... 49&t=53513

Once source indicates the new name was registered in 1928 (Soviet vessel), while others note red stars appear on the funnels as early as 1921/22. The Krasin/Krassin name is associated with the Nobile party (Red Tent) rescue in 1928, so the Svyatogor/Sviatogor name is definitely gone by then. [Currently applied to a cargo vessel from 1970 which is docked right now in the Black Sea.]

All that's left to find is who or what was "M B", and did they leave a behind one-armed sailor to flood the ship and grab a souvenir on the way out the door...surely a two armed guy would have snagged the creamer to boot.
Top

BTW..much obliged to you both for the kicks.
Top

Several checks clear up the name dating...not changed to Krasin until 1927.
One of the better accounts of the presence of the Krasin in Bremerton Washington for examination in 1941: https://alchetron.com/Krassin-%281917-icebreaker%29

Does cover later East German work, but fails to note Baltimore re-equipping (1942) and final USSR re-working. If the object had become trapped somewhere in the bowels of the ship with the partial sinking, then it may have been released and recovered at one of these four points. (Navy Yard Puget Sound being the closest to here.) Pretty crazy, but they found stuff trapped in the walls of the Queen Mary.

The name of the commander in 1927 surfaces, but no others have come to light.
Top

After searching many sites and available artifacts, it would seem that the cyrillic MB should not relate to the initials of any one individual but rather, if tradition holds, act as a designator of a type of service (such as Marine Military) or for a location of assignment of the vessel (such as Baltic Fleet). The Latin conversion of the letters leaves numerous possible single words that may have come together in this specific instance. A lack of surviving objects from this period in the Imperial Russian Navy history makes the task more difficult. [A note on reference writings: There was no "USSR" throughout the the first half post-Revolutionary Russian & Soviet history, this union being completed mid-century.] So far, everything seems to run toward the conclusion that the object is authentic and from the named vessel around 1917-18. Nothing (Red Fleet related) indicates that it would have been produced for the return of the vessel under the Krassin agreement in 1921.
Top

Interesting item indeed. MB could also be Cyrillic. M is the same in Cyrillic and Latin alphabet but B in Cyrillic is V in Latin alphabet. I tried to figure any connection with the Russian Arctic Ocean Flotilla and MB/MV but couldn't find any. Maybe someone who understands Russian could help.

And I noticed that there's a letter Ъ at the end of Svyatogor/Святого́р. That letter was used before the spelling reform of 1918 so it also speaks for the authenticity.

"Before 1918, a hard sign was normally written at the end of a word when following a non-palatal consonant, even though it had no effect on pronunciation. For example, the word for "cat" was written "котъ" (kotj) before the reform, and "кот" (kot) after it. This old usage of ъ was eliminated by the spelling reform of 1918, implemented by the Bolshevik regime after the 1917 October Revolution."
https://en.wikipedia.org/wiki/Hard_sign ... r_pre-1918
Top

Wonderful news, much appreciated. Just been in contact with St. Petersburg museums and then sent the photos as per their response. Hopefully we'll get more to add.
Top

Thanks V.V. in Russia.
Top

Whipping the horse: Reportedly Russian Naval tradition held that for each of his fleet ships the Tsar was presented with a short list of names from which he personally selected the final choice. This was an armed gunboat and icebreaker, and thus a war ship by conventional rules, but I can't prove he picked the name. A book concerning the 1920 rescue events came out in 2011 and might yield some additional facts.
Top

This early history of this vessel is gradually sufacing from old accounts. In one case, US Forces in Northern Russia 1918-19 from the American viewpoint places Svyatogor in regular transport service (Murmansk-Archangel) with specific reference to (11/18) Rear Admiral McCully et. al. in transit as per section 21A: https://www.history.navy.mil/content/hi ... -1919.html
Top

The icebreakers, Northern Russia, and coverage of the scuttling actions from the Canadian side of things: https://www.cnrs-scrn.org/northern_mari ... _17-42.pdf

An attempt to blow up the ships failed. All accounts seem to indicate Sviatogor was left in good condition, so perhaps all the dining wares were left aboard and intact by the retreating red forces. Oddly, the ship is not listed among the official names of Royal Navy ships (on-line lists) even though it was taken into service (minesweeping etc.) and held for 3-4 years as an active vessel. So far, there has been no information on any alterations, repaintings, guttings, or rebuildings while in British hands.
Top

Red commander placed in charge of the icebreakers named as one "Captain Dreyer", who was later tried and executed (shot) for debacle of scuttling in which one ship got loose and settled downstream rather than creating an effective barricade.

Model of ship with name in Latin (rather than Cyrillic) resides with Newcastle University. (Possibly represents appearance while in British service...not confirmed.)

Museum ship has had royal visit in recent years. And there was a temporary historical display in Newcastle, but did not sound like they had artifacts from onboard.

There you have it, a bell and a bowl.
Top

Response from Director of World Ocean Museum in St. Petersburg " Icebreaker"Krassin" : "We have in our museum something very similar. In murmansk is a Naval Museum and they also have such things." End-of-message.
[My many thanks are extended for this...always nice when any information is freely shared and historical documentation is served.]
Top

A singular Royal Navy service record was posted in 2013 on "ancestry" (sorry, no commercial links rule) for Charles Frederick Lewis who served for a short period in 1919 on Sviatogor (as spelled therein). He had also been posted to another ship known to have been engaged in minesweeping duties (Scapa Flow) in this same time period. It would seem likely that the Royal Navy would have changed the name on the ship bow early on. Whether the furnishings were ever converted is probably buried in some lost records.
Top
Post Reply
18 posts • Page 1 of 1