I have a Small Silver Cup with a "Windsor" crest on it and the name Dyson Windsor (with a double 00) on the bottom.I don't know if this is a silver makers mark or not?
Any help would be appreciated!

Hi,
Dysons had for many years a music shop at 9 Thames St (selling records and musical instruments) with the jewelers shop next door (the picture was taken shortly after 1960).They were selling clocks, and brass barographs, too. Jewelry shop means they must have made their own jewelry, but I could not find their mark. Cannot tell whether Dyson business in Leeds is connected with Windsor.Silver produced in Sheffield by other makers was retailed by Dysons. Goss crested china sold there and your cup were probably Windsor souvenirs, being a variety of merchandise in their shops.
Regards
Top

That would be a retailers' mark only, typical of what is found on such souvenir items. It's likely that the piece would have been originally a silver-plated one.

In too many places, I fear, the Royal Wedding is proving a source of discord and strife, and being made an occasion for jobbery and favouritism. All sorts of squabbles have arisen in hitherto peaceful communities. There is a lack of harmony even in the Royal Borough of Windsor. One of the members of the Wedding Committee there is Mr. Councillor Dyson, the head of a firm of jewellers. Considering the very active part which this gentleman has taken in the arrangements, his fellow tradesmen thought that he would not tender for the supply of the plate which is to form the town's gift. Mr. Dyson did tender, however, and, what is more, the Committee accepted his tender. The other local silversmiths assert that not only did Mr. Dyson possess an unfair advantage over them owing to information which he obtained as a Committee-man, but that his estimate was higher in amount than several of the rejected tenders. It seems to me that they have good cause to complain of the action of the Committee, if not of that of Mr. Dyson.

...Thank you very much indeed for that very specific information!

Hello, below is an image of the mark on the silk of a spoon box supplied by Dyson & Sons of Windsor. 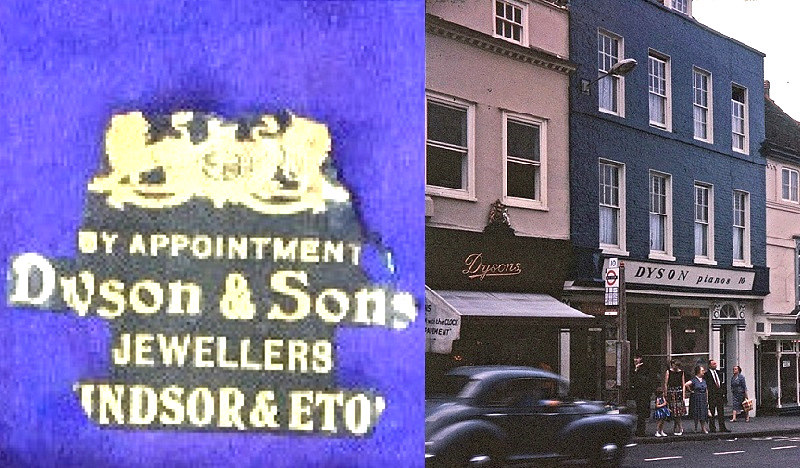 Note, the silk likely said "Windsor & Eton", but they are like twin towns facing each other across the river Thames and there only appears to be the single jewellers shop at 9 Thames St. The silk has the "Royal Crest" and by appointment. They seem to have had a royal warrant as clockmakers and jewellers to the Queen (Victoria). There is a barograph in the Royal Collection Trust supplied by Dyson & Sons.
"AG2012" commented on the business's music division and I think 2nd half of my image maybe the photo posted by "AG2012" which has now been lost. I found on a "Piano" forum that Dyson & Sons were tuners to the Queen & Royal Family and were retailing (pianos?). A Thomas Dyson founded 'Dyson and Sons, pianoforte dealers' in Thames Street in 1865 and he became Mayor in 1890. It is not obvious when the jewellery part started. Dysons sold plenty of souvenirs from their shop you can easily see on line examples of "Goss" china crestedware they apparently retailed.
There are not many of Christian names to go with "Dyson & Sons" the Jewellers. I found one, a "Cyril", later Sir Cyril Dyson who seemed also to have been a Windsor Town Mayor and a "Geoffrey" who was his son. A lot of this was in the post WWII period. There was also another "Dyson" Frederick (again later Sir), also a Mayor of Windsor for periods before and after WWI but I found no on line information to positively connect him to the Jewellery or music business. Around the late 19th and very early 20th centuries there are "London Gazette" references for Dysons as music sellers. The jewellery business ended in the 1980's.