Hi, Need help identifing this mark on my box link Sterling ID bracelet. The man I bought it from said that it was an ID bracelet that the English soldiers wore during the war but not sure if this is true as there was no name engraved on the bracelet. The back is stamped "Sterling" and then in a house-shaped cartouche it has Ste, then what looks like an anchor with a bird head facing left at top of anchor, then the capital letter F. Below that it is stamped 925/1000 (still inside the cartouche). Any help would be sooooo greatly appreciated! The image is the best that I could get as the mark is very worn down. Thanks in advance for your help!

Images of bracelet to be posted shortly! Ran out of batteries!
Top

Ok. Here are images of bracelet:

Hi.
I cannot help with marks, but to me the bracelet looks likely to be an unmarked S O S bracelet , worn by some one who requires specific procedures or similar in an accident, with S O S on the outside and the name of the wearer and for example "DIABETES 2" or "I take WARFARIN" (a blood thinner)
Top

Thanks larkfield, but I know what type of bracelet you are talking about and this is not it. Those are usually made out of cheap stainless steel and this is sterling silver, 1.6 oz.
Top

Sterling ID bracelets are still in production today.....and can be engraved with anything desired - initials, the same information that might be found on dog-tags, medical info, romantic sentiments, etc.; have also seen quite a few with applied military insignias. Can't make out your marks, but they don't appear to British, and as you've noted, it's not engraved so not sure how the seller connected it to military use. So far as I know, these became popular during WWII and were often worn by members of the military, either given as gifts by family or sweethearts, or purchased by the wearers at the PX (believe both my brothers did that in the '60s), there were more delicate ladies' models too. They were still fairly popular when I was a teenager in the '70s, sometimes the girls would give them as gifts to boys, and sometimes the boys would give theirs to girlfriends as a symbol of "going together". Most that I've run across were American and some Mexican-made, though I have also seen a few with British hallmarks, and can't see any reason that they wouldn't have been produced elsewhere too. The last one I had with military information had a clasp marked with a 1940s patent number, similar in concept to the one in the 1944 ad below.

Hi,
The mark looks very much like a French "obus" maker's mark, used on exported silver, the "sterling" mark would not conflict if French and made for export. If you could provide a clear image of the letters and the symbol between, we may be able to ID the maker.

ps. have a vague recollection of getting one of these as a birthday gift ca.1968
Top

The images are so blurry, that my interpretation is mainly based on parts of yours description.

The in this case Â»houseÂ«-like cartouche looks like to be the French Export mark.

The contents of the French Export marks have to be:

Initials and symbol of the maker - in this case: (SocietÃ©) S(aglier), anchor, F(rÃ¨res)

Here you could find the explanation of the (normal) maker's mark of Saglier FrÃ¨res & Cie.:

Please do a favour: Add a very clear image of the mark to this topic — it would help other readers too.

Thank you all so much for your help with this! I tried to take some more clear pics of the hallmark but below is the best I can get. (Should have bought that microscope last year!!!). On one of the images below, I wrote over the letters and the anchor so you can get a better idea what it says. The bracelet looks to be sand casted or whatever that process is called nowadays. 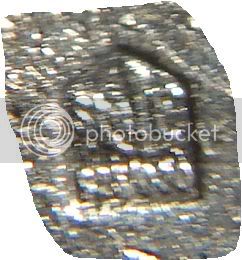 Hi, I believe it must be SociÃ©tÃ© Parisienne de Bijouterie, mark first registered Paris 1902. Their mark is Ste.P with anchor in between. I cannot imagine that the responsible bureaucracy would have allowed for the confusion of two separate companies, one Ste.F, the other Ste.P, to both use an anchor symbol. I suspect the mark on your piece either received a ding on the P or that the stamp itself suffered some damage prior to its use.

Here is a side image of the bracelet.

It is very well made. The "ID" part of the bracelet at the bottom edges, you can see it was shaped to match the sides of the links. This is my favorite bracelet! Stays on very well, except for the time a Cockatoo removed it from my wrist with its beak! I think someone had trained that bird to steal jewelry..lol!

Is there a registered mark of Ste.F? Is that the maker that Silverport was speaking about?
Top

I start to hate blurry images — maybe I should ignore from now on such questions for ever?

Just now again I’ve got a lesson, why Â»925-1000Â« in his history has started to ban questions without images — we should ban also blurry images, or still ignore that question.

Well, with the “manipulated” images it becomes imaginable that the former description of Â»ypcomchicÂ« was well a guideline, but not a very good one: Â» The back is stamped "Sterling" and then in a house-shaped cartouche it has Ste, then what looks like an anchor with a bird head facing left at top of anchor, then the capital letter F. Below that it is stamped 925/1000 (still inside the cartouche). Â«

The French Export marks, which I’ve seen until yet, were always in details not similar to them of the “normal” maker’s mark of the maker. That could be for reason of space — lozenges are different as an Â»obusÂ«. This Â»obusÂ« has also another, lower ‘roof’ as the former version. That signification is that makers with normally a maker’s mark in a horizontal lozenge could more or less fit well their mark’s details. But some body with a normally vertical oriented mark could be misinterpreted.

Both have an anchor too!

The Â»Saglier FrÃ¨resÂ« mark I know from an image, could be well interpreted as Â»ypcomchicÂ« has done: Â»… an anchor with a bird head facing left at top of anchor …Â« I live here in a few meters distance from the Atlantic Ocean — the Gulls settle every where; why not becoming an symbolic additional element of a maker’s mark?

But the letters of the maker’s mark, Â»ypcomchicÂ« show here, are a “Sansserif” typeface = without serifs!

Well, the here shown letter F maybe could be a former, but now ruined letter P!?

That Â»Saglier FrÃ¨resÂ« with their broad range of products in Silver, as also in Plated, have never made jewellery?

But well, a company which name is Â»SociÃ©tÃ© Parisienne de BijouterieÂ« could be much more a candidate of being the owner of this maker’s mark — and also the maker of this bangle too.

Â»ypcomchicÂ« must learn to could live here with: The bangle is maybe made by Â»SociÃ©tÃ© Parisienne de BijouterieÂ« - and assayed in the time span of 13 January 1917 onwards.

Now a very brief remark on the production method:

Uploading a new, hopefully clearer, image of hallmark on bracelet. The letter on the far right is a "F" and it has serifs. It is not a damaged P. Also, looking at the top of the anchor, it does look like a bird facing left and its eye is the hole in the anchor top.