Russian Brooch - is this a maker's mark?

Russian Brooch - is this a maker's mark?

A friend of mine recently bought this Russian brooch (sadly in an unassociated Fabergé box!) and asked if I could help discover any information about it. The last picture shows the only marks he was able to find, apart from a scratched '15X'. The Kokoshnik mark is poor, to say the least. I suppose the other mark could simply be an owner's initials engraved into the piece or just possibly it's an unusual form of maker's mark.

Has anybody any suggestions?

Many thanks, as always, 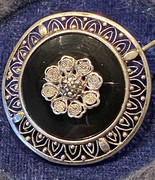 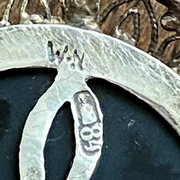 A lousy punch...Anyway, with some reservations: The three element hallmark is a so called "shovel mark" usually punched on small objects like this. The elements are the assay office cipher. In this case it seems to be Greek delta for Moscow, The actual hallmark, a kokshnik head facing down, and the fineness 84 zolotnik (875/1000). The mark was used 1908-1917/27). What wonders me is that there should be a maker's mark too. Are you sure there isn't one? The WN could be the maker's mark, but cannot find any suitable in Moscow. Probably it is owner's initials as you also assume...a bit strange marking I would say...but?
Top

Thanks very much indeed for your reply and for narrowing down the city mark and date. I asked my friend to double check and he confirms there is absolutely no other mark. I don't know how these brooches are made, so perhaps it was assayed before completion and the maker's mark was removed with subsequent piercing. This isn't unknown with British silver.

Hi,
Qrt.S is right for being suspicious.
Safety clasp shown here on the brooch with rollover closure was used in late 1920s, not before that.Therefore,it is inconsistent with Russian Imperial marks.
Regards
Top

Thanks AG2012, that's rather interesting and I suppose it could be fake as I think you are suggesting. However, do they bother to fake brooches such as these when they could steal more money by faking 'higher value' objects? I wondered for a while whether someone may have overstamped the original mark, but the other side is enamel, so either they would have damaged the enamel or gone to a great deal more effort to remove and replace it. Looking at the back, it doesn't look as though the enamel section was removed. Another thought is that perhaps the pin is a later replacement. I haven't asked the owner whether he thinks that may have happened. The brooch is in America and I'm in the UK, so I can't check myself, so I need to ask.

Note as I said earlier, this is not my brooch so I have no interest in trying to prove it is real or fake for that matter, rather I'm much more interested in the discussion.