Was needing help identifying some Japanese Souvenir Spoons that have an 84 Zolotniki on both the stem
and the bowl. I have heard or these being attributed to Russian makers in Manchuria shortly after the fall of the Russian Empire or as Chinese psuedomarks. Either way they were defiantly catered to a western market. Any info is greatly appreciated.

My assumption is that these Nagasaki spoons were made in Japan with a hodgepodge of symbols and marks that were meant to both represent Nagasaki (as Japan's primary--indeed, only--port open to the outside world for over two centuries from roughly 1640 to 1860) as well as appeal to the international tourist and trade market.

The ones I have seen are all cast, and it seems they were made over a long period, say 1890 to 1930, with varying degrees of finishing (and probably varying degrees of silver content). They are sometimes marked 0,900 as well as 84, also with stars akin to the Spanish silver mark.

I believe the 84 mark is meant to appeal to those markets (most importantly, Russia) where the 84 zolotnik standard was in use, but would doubt that it is the mark of a Russian silversmith working in Manchuria or elsewhere, especially if this spoon has no maker's mark.

Thank you for the information. We were hired by a local auction company to assay a large collection of these spoons all the same cast style but with many different marks including .900. We stopped after a half dozen and found them to range from .650 to the very low 800s (some of the spoons tested were even identical and still ranged in purity). Testing process used was physically removing silver from the spoons, melting, then shot with our Niton XL3t. Still a cool novelty piece but certainly not the quality we were led to believe.
Top

Many thanks for this follow-up post, which provides very helpful information about the actual silver content of these spoons, and probably for other Asian silver marked 84. As I mentioned before, my understanding of the 84 mark on these spoons has always been that they are decorative and suggestive rather than a purity guarantee.

I wish I were as knowledgeable about the testing of silver as you are. I often hear anecdotally from Chinese collectors that some older Chinese silver (mass-produced handcrafted jewelry in particular) was often made of whatever coin the maker could lay hands upon, and that therefore the silver, copper, and nickel content is widely divergent, even in one piece. A cast piece might show 80 to 90% silver purity in one section and under 50% purity in another. I have never gone to the trouble of testing these pieces, though. I would imagine the same was true of some lower grade Japanese silver of the same period (roughly, 1900-1940).

Traditionally, in Asia, a reputable retailer's mark and fine workmanship were usually more than enough of a guarantee of quality, more so than a purity mark per se.

Was hoping that some of our Asian silver experts would have something definitive on these spoons, especially since a theory I posted years ago on another forum, suggesting a possible connection to Russian silversmiths working in early 20th century Harbin, Manchuria (under Japanese influence at that time), has been turning up in a number of sales descriptions as fact. Found my first of these many years ago in a mixed lot and find the '84' mark interesting, and have to suspect that the use of it might trace back to Russian silver - not saying made by Russians, perhaps just a mark copied as with British pseudo-marks on Chinese Export silver.

Believe I've only seen these with Japanese port cities, usually Nagasaki, but also Moji and Yokohama; and have also run across a few with the mentioned '900' in addition to the '84'. Despite the marks, have always been dubious of the silver content, they often have a yellowish tone - the one that's been in one of my spoon cases for 20+ years has never shown any tarnish, so I took it to my friendly precious metals dealer and testing on his XRF spectrometer showed it as cupronickel with traces of other elements, but no silver at all. Have also seen them with fairly serious plate loss on brass base metal, so it would seem that all sorts of metals were used for the spoons, but they were marked '84', regardless.

Have also run across a few 'Nagasaki' spoons either engraved or stamped with naval anchors and/or crossed American/Japanese flags, symbolism that was used fairly often on souvenir items relating to the 1908 arrival of the American fleet in Japan - first quarter of the 20th century has always seemed likely dating to me, give or take a few years either way.

Am curious what the characters in the large shield translate to, as well as the odd symbol in the smaller shield under the '84', they show up on quite a few of these spoons...

There seems to be no positive identification of these spoons as yet.

On the spoon shown, in the large shield above “NAGASAKI” is 福寿, “good fortune and long life” or “luck and blessings,” a common enough phrase in Japan but in this case probably imitating similar CES spoons. Indeed, the flower in the interior of the bowl is a plum, while those beneath “NAGASAKI” are cherries. Traditionally, in Japan the plum represents China and the cherry, Japan.

The symbol in the small shield beneath “NAGASAKI” is an old-style hiragana ゐ(phonetized, i), which went out of common usage around 1910. As it is not found on all of these spoons, it might be one retailer’s mark.

Labor was cheap and plentiful in pre-WWII Japan, so manufacturing inexpensive spoons in Harbin and then shipping them to target markets in Japan would have been commercially disadvantageous. (I cannot imagine there would have been a great demand for spoons bearing the names of Nagasaki, Moji, or Yokohama among either residents of or visitors to Harbin, and I know of no such spoons bearing the name of Harbin.) Given the variations in the design and markings, they were probably made by several local cottage-industry metalworkers subcontracted by one or more retailers. As late as the 1980s and beyond, Japan’s major cities had large semi-industrial districts filled with such small businesses usually run by a family living in an attached home.

Cheryl notes that the design of crossed Japanese and American flags would have appeared during the heyday of amicable relations between those two nations (roughly, 1905-1925). I agree that their production probably began around 1900 or shortly thereafter. Most of the 84 marks I've seen on these spoons appear to be part of the mold (that is, the design) rather than punched. My current theory (to borrow Cheryl's word) is that the Chinese motifs (plum, "good fortune," the dragon finial) as well as the 84 mark were loose references to the two foreign countries most familiar to Japanese, thanks to the 1895 victory over China and 1905 victory over Russia, and that the romanized spellings of the port cities would have augmented the exotic allure of these souvenir spoons for Japanese visiting these places while also appealing to the tourist trade.

The end-date for these spoons is probably around 1930, when the Japanese government began implementing a national system of hallmarking. Furthermore, nearly all of the small metalworkers throughout the Japanese Empire were pulled into munitions by 1938.

Tossing in a sample's images (original photos lost) of Snake & Rats handle version of "Nagasaki Silver"...left exactly as found showing copper bleeding, verdigris, and dull finish. Maybe, lower-grade alloy rather than alternate plated-base types. (A portion of front end on handle is snipped to provide a snug fit of bowl when secured into the false drop.) 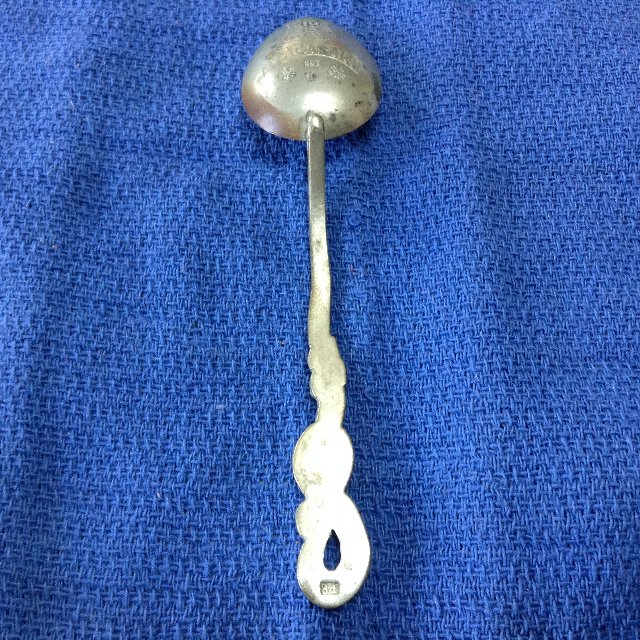 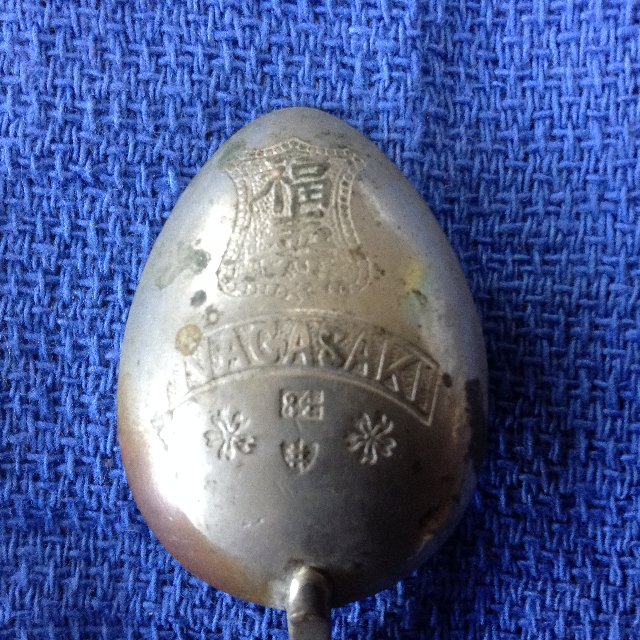 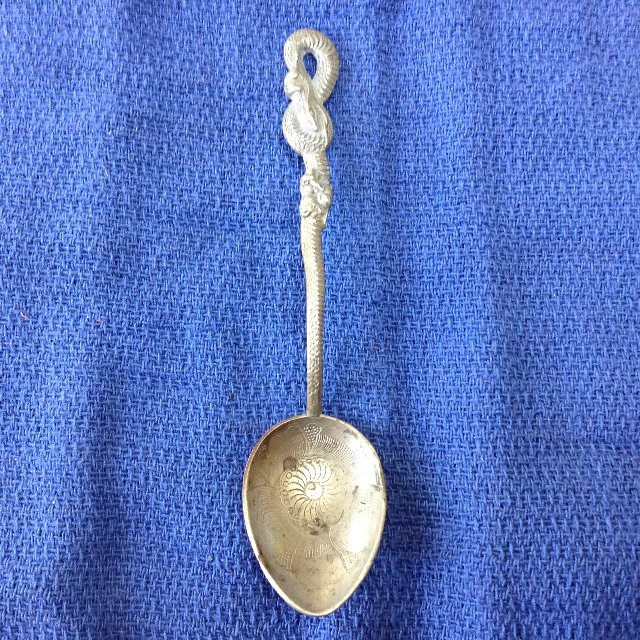 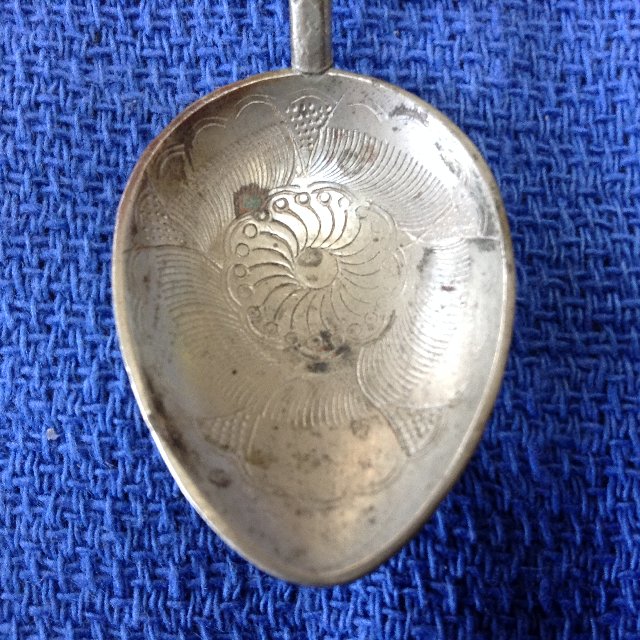 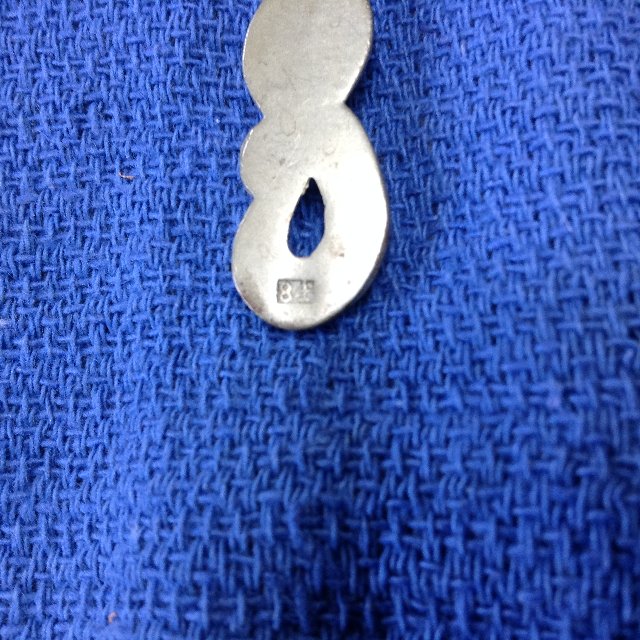 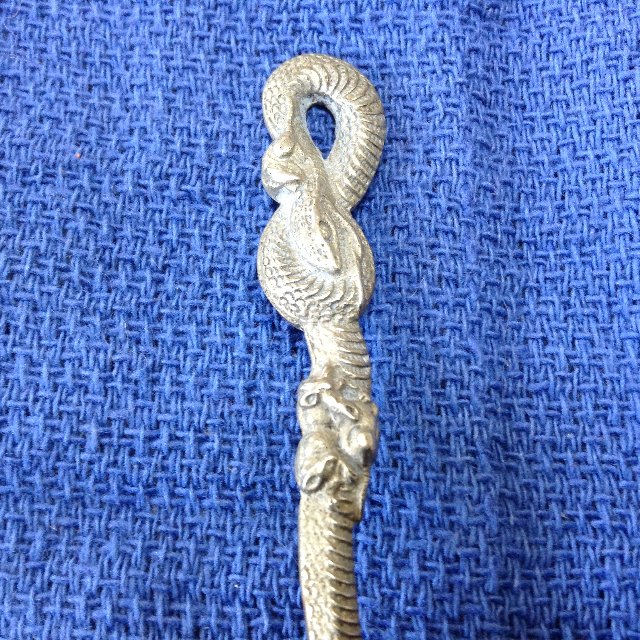